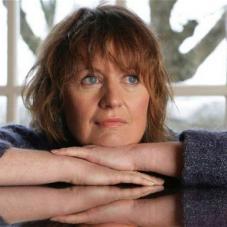 Sally Beamish was born in London. Formerly a viola player, she moved from London to Scotland in 1990. Her music embraces many influences: particularly jazz and Scottish traditional music. She has written for numerous soloists, including Tabea Zimmermann, Håkan Hardenberger and Steven Isserlis. Beamish’s music is performed and broadcast internationally. Her string quartet for the Elias Quartet, Reed Stanzas, received its premiere at the 2011 BBC Proms, and won a Royal Philharmonic Society Award. In 2012 Beamish was BBC Radio 3 Composer of the Week; and Branford Marsalis premiered Albatross at the World Saxophone Congress in St Andrews, with the composer at the piano. He will also be recording the saxophone version of Under the Wing of the Rock, dedicated to him, for BIS, with the RSNO, in 2014. In 2013, Beamish’s Variations on a Theme of Benjamin Britten were premiered by the Academy of Saint Martin in the Fields. Flodden, written to commemorate the 500th anniversary of the battle, was premiered by the SCO in 2013, and shortlisted for an RPS Award. 2014 features 2 recordings of Beamish’s sea music: the Trusler Carroll Wass Piano Trio in the Seafarer Trio, with narrator Sir Willard White, for Orchid Classics, alongside her trio arrangement of Debussy’s La Mer; and Seavaigers, her concerto for Scottish Fiddle and Harp, recorded by Chris Stout and Catriona McKay with the Scottish Ensemble. Beamish’s Spinal Chords, with text by Melanie Reid, toured the UK in 2014 with the Orchestra of the Age of Enlightenment and narrator Juliet Stevenson. Equal Voices, marking the centenary of the First World War, is a major work for the LSO, with poet Sir Andrew Motion; and Birmingham Royal Ballet has commissioned a full-length ballet for 2016.