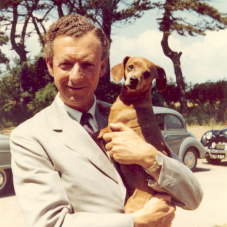 Britten was born in Lowestoft, Suffolk, in 1913. He moved to the Old Mill, Snape, in 1937 before eventually moving to Crag House in Aldeburgh in 1947. In his diary he wrote of Suffolk, ‘The county is grand – none in England like it – and I feel I’m infinitely wise in choosing this place...’.

Crag House, on Crag Path, overlooks the sea and photographs of Britten working at his piano show gulls over the shingle with the sea beyond. It was from here that the early Festivals were planned, with many events in Jubilee Hall, just a few doors down the road. In seeking further solitude from public eyes Britten moved to the Red House, just outside Aldeburgh, where he and Peter Pears (whom he met in 1937) lived until their respective deaths.

With Britten living and working in Suffolk for most of his life, his work is inextricably linked with the landscape and people of the region, for example, through works such as Peter Grimes, Albert Herring, Noye’s Fludde, Let’s Make An Opera! and Three Church Parables

To find out more about Benjamin Britten, visit the Britten-Pears Foundation website: brittenpears.org.